July in London is unpredictable. Coming from Seattle, July is known for the 4th, BBQ’s and an intense heat with sunshine everyday.

This July, London has been nothing but rainy, grey and drab with mixed humidity. It’s as if this country is doing everything it can to make me homesick. Paired with a bleak future and heartbreak, keeping myself feed is the least of my concern. I’ve thrown myself into reading, but finishing The Hunger Games wasn’t easy. If you have any suggestions for what to read after such a trilogy, I’m dying to occupy my mind. 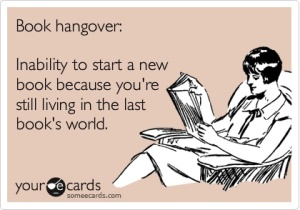 Working part-time does wonders for my creativity on meal planning. With the rain and lack of warmth, I scoured the Internet for a soup recipe for the things I had on hand: bacon, onions and carrots.

The end result was far from what the original recipe directed me to do, but it turned out so lovely I’m thinking of making it again with some more veg.  It’s perfect with the bread I haven’t been able to consume, freezes, and was just the thing for a hearty meal for my sick flatmate.

Adapted from Potato and Onion Soup from Allrecipes.com

2 onions (I originally used only 1 onion and found it wasn’t enough!)

2 quarts water (or 8 cups because math is my frienemy)

1-2 cups mix of noodles, any kind (I used a mix of macaroni and fusilli)

Soup isn’t difficult to mess up, and I am certainly not a foodie. I don’t usually cook either, so I thought it would be fun to share the highlight of my week.

The soup heats up well, but it’s best eaten the day of or day after due to the noodles soaking up the water. Freeze on day of rather than freezing what’s left over.

Mmmmm, sometimes in life there’s nothing better than a good book, a cup of tea and a hot bowl of freshly made soup. 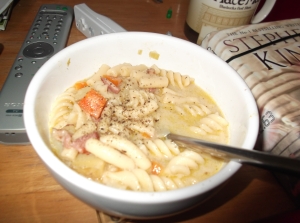