It’s Banned Books Week everyone! Take some time and flip through your favorite banned book or share it with a friend!

1. Flowers in the Attic by V. C. Andrews 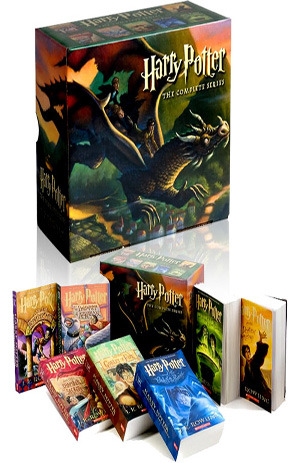 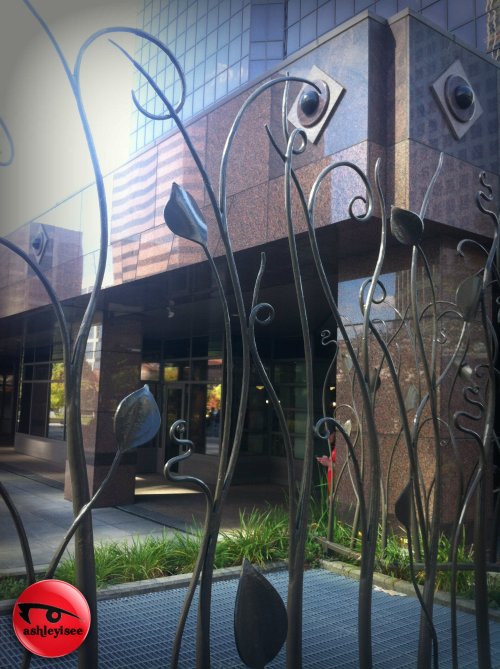 Happy Birthday to the following books! I’m very partial to the debut series, Heavenly Nostrils as the author is Washington born and amazing! Enjoy!

The Good Sister by Jamie Kain

The Kinsey sisters live in an unconventional world. Their parents are former flower-children who still don’t believe in rules. Their small, Northern California town is filled with free spirits and damaged souls seeking refuge from the real world. Without the anchor of authority, the three girls are adrift and have only each other to rely on.

Rachel is wild. Asha is lost. Sarah, the good sister, is the glue that holds them together. But the forces of a mysterious fate have taken Sarah’s life in a sudden and puzzling accident, sending her already fractured family into a tailspin of grief and confusion. Asha has questions. Rachel has secrets. And Sarah, waking up in the afterlife, must piece together how she got there.

(To my knowledge this is a standalone) 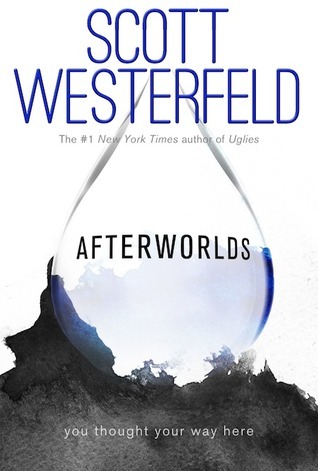 Darcy Patel has put college and everything else on hold to publish her teen novel, Afterworlds. Arriving in New York with no apartment or friends she wonders whether she’s made the right decision until she falls in with a crowd of other seasoned and fledgling writers who take her under their wings…

Told in alternating chapters is Darcy’s novel, a suspenseful thriller about Lizzie, a teen who slips into the ‘Afterworld’ to survive a terrorist attack. But the Afterworld is a place between the living and the dead and as Lizzie drifts between our world and that of the Afterworld, she discovers that many unsolved – and terrifying – stories need to be reconciled. And when a new threat resurfaces, Lizzie learns her special gifts may not be enough to protect those she loves and cares about most.

Phoebe and Her Unicorn: A Heavenly Nostrils Chronicle by Dana Simpson 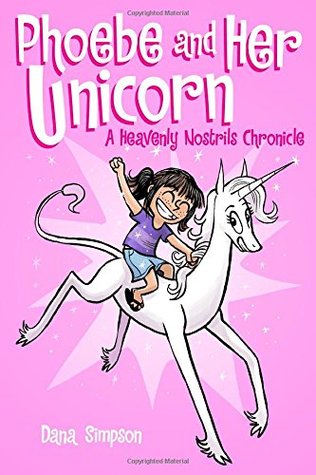 It all started when Phoebe skipped a rock across a pond and accidentally hit a unicorn in the face. Improbably, this led to Phoebe being granted one wish, and she used it to make the unicorn, Marigold Heavenly Nostrils, her obligational best friend. But can a vain mythical beast and a nine-year-old daydreamer really forge a connection? Indeed they can, and that’s how Phoebe and Her Unicorn unfolds.

This beautifully drawn strip follows the unlikely friendship between a somewhat awkward girl and the unicorn who gradually shows her just how special she really is. Through hilarious adventures where Phoebe gets to bask in Marigold’s “awesomeness,” the friends also come to acknowledge that they had been lonely before they met and truly appreciate the bond they now share.

The Vault of Dreamers by Caragh M. O’Brien

From the author of the Birthmarked trilogy comes a fast-paced, psychologically thrilling novel about what happens when your dreams are not your own.

The Forge School is the most prestigious arts school in the country. The secret to its success:  every moment of the students’ lives is televised as part of the insanely popular Forge Show, and the students’ schedule includes twelve hours of induced sleep meant to enhance creativity. But when first year student Rosie Sinclair skips her sleeping pill, she discovers there is something off about Forge. In fact, she suspects that there are sinister things going on deep below the reaches of the cameras in the school. What’s worse is, she starts to notice that the edges of her consciousness do not feel quite right. And soon, she unearths the ghastly secret that the Forge School is hiding—and what it truly means to dream there. 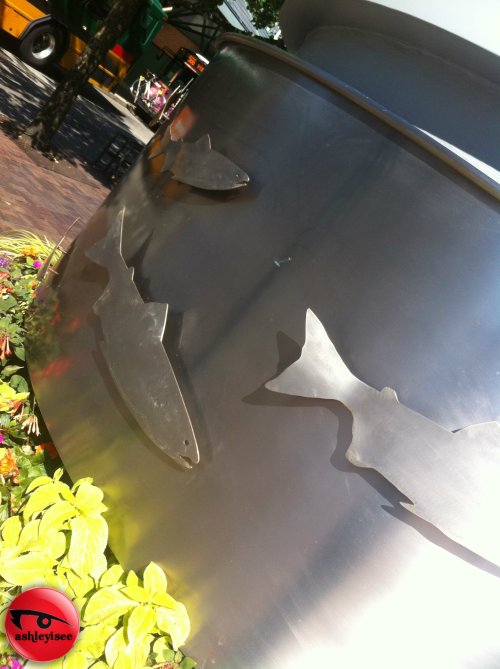 Last month I was extremely lucky to receive Rainbow Rowell’s Landline for July’s Riot Read. I found Quarterly through Tumblr, the website was a bit difficult for to maneuver. Quarterly emailed me wanting feedback as to why I didn’t complete a subscription, I told them how I felt and they gave me a $10 off voucher! I used it on Riot Read. It’s like monthly subscription book club. I was extremely lucky to get a book that was highly sought after, freshly published and right up my alley. But, I have enough books that I am trying to get through so I cancelled and instead signed up for Book Riot’s for their every three month subscription. 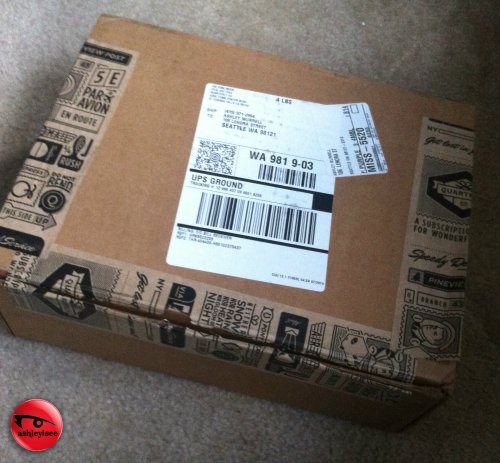 It is really awesome getting a big, beautiful parcel in the post. 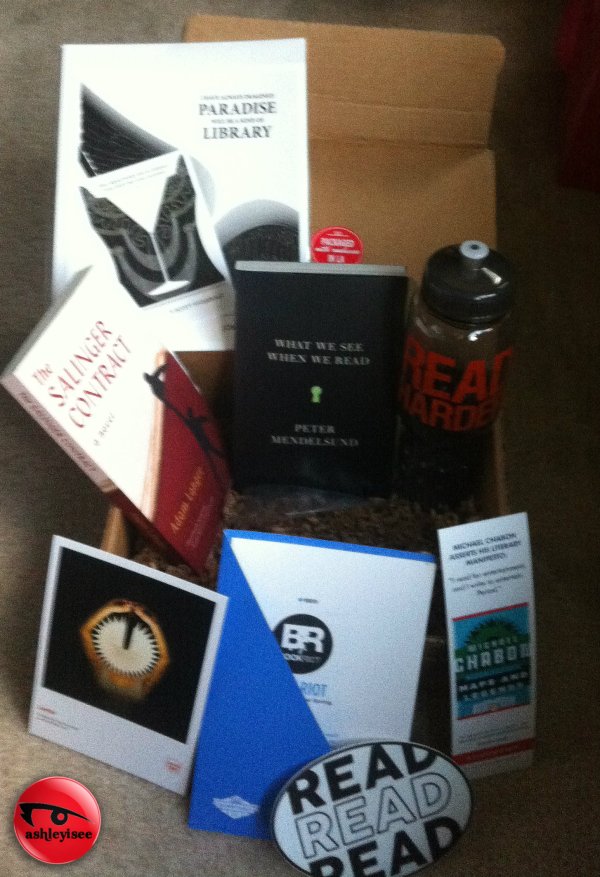 I do not regret upgrading to a more boisterous parcel. I like getting things in the post and if it supports a book company and I get books out of it—seriously—what’s not to love about it? 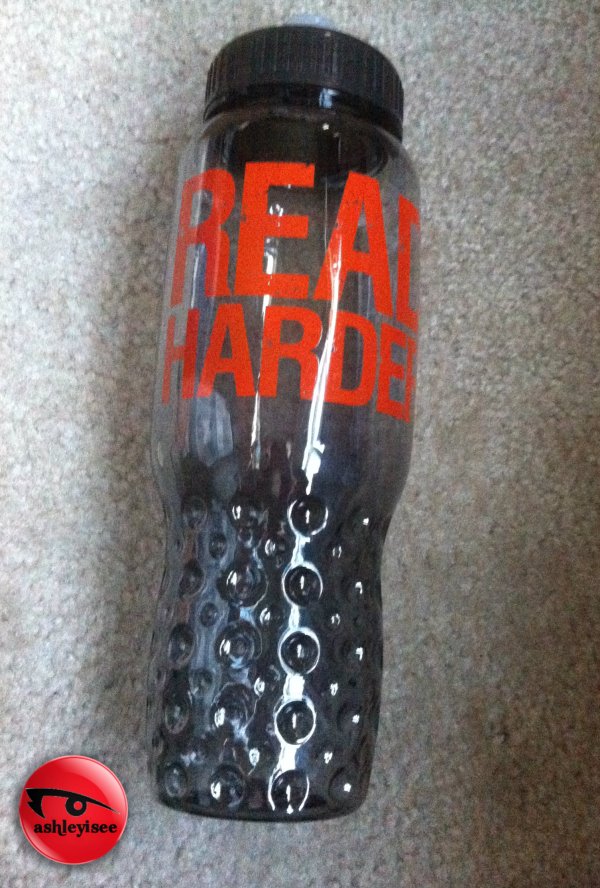 This parcel was not a disappointment either! I freaked when I saw the water bottle. I had needed a new one for work. My nalgene needs a good cleaning.

I also got two beautiful custom literary quote prints from Obvious State. The large one is about libraries—I’M IN LOVE WITH IT. The smaller one is from The Great Gatsby. I am not the biggest fan of that book, but I DROOL over the print. It is stunning and meticulously done.

And of course—I got TWO fantastic books! The Salinger Contract by Adam Langer and What We See When We Read by Peter Mendelsund. They look and FEEL amazing! I am very pleased with my switch in subscriptions and I eagerly await the next three months, when my final parcel of the year arrives!

Here’s what I got in total:

What do you think? It is worth paying money for books one probably doesn’t need? But then again—one can never have too many books…