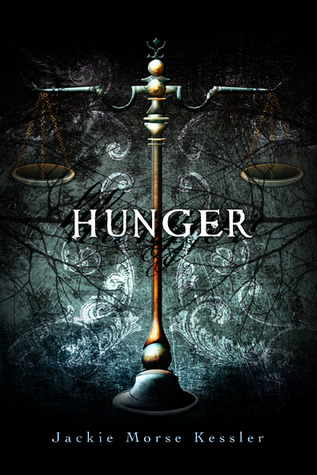 “Thou art the Black Rider. Go thee out unto the world.”

Lisabeth Lewis has a black steed, a set of scales, and a new job: she’s been appointed Famine. How will an anorexic seventeen-year-old girl from the suburbs fare as one of the Four Horsemen of the Apocalypse?

Traveling the world on her steed gives Lisa freedom from her troubles at home: her constant battle with hunger, and her struggle to hide it from the people who care about her. But being Famine forces her to go places where hunger is a painful part of everyday life, and to face the horrifying effects of her phenomenal power. Can Lisa find a way to harness that power — and the courage to battle her own inner demons?”

I’ve been wanting to read this book for ages. I have such a personal connection with the subject matter and was so pleased with how the author spun this first in the series. I love the character of death, his personality, his aura. The horse is also fantastic, they have just as much feeling as the humans.

There is a lot of depth within this personal struggle of Lisbeth. She’s still a teenage girl trying to discover and most importantly, accept herself for who she is. As a reader we travel on this adventure that is at times hurtful and scary, and we don’t know if Lisabeth will come out right in the end. She has to create death as she slowly kills herself. She grows weaker, yet the fire of saving those starving, when she refuses to feed herself shows that her story isn’t quite over. I kept turning the pages hoping that this strong, caring, teenage girl would wake up and understand, that she is just the same as those around the globe dying because of lack of food. For those of us that have known the hunger and ignored it because we don’t look the way we want, Lisabeth will serve as a tale to comfort us around the familiar curtain of caution.