Just a taste of the many YA books that have been freshly published this month! Images/summaries from Goodreads.

Between the Devil and the Deep Blue Sea

You stop fearing the devil when you’re holding his hand…
Nothing much exciting rolls through Violet White’s sleepy, seaside town…until River West comes along. River rents the guesthouse behind Violet’s crumbling estate, and as eerie, grim things start to happen, Violet begins to wonder about the boy living in her backyard. Is River just a crooked-smiling liar with pretty eyes and a mysterious past? Or could he be something more? Violet’s grandmother always warned her about the Devil, but she never said he could be a dark-haired boy who takes naps in the sun, who likes coffee, who kisses you in a cemetery…who makes you want to kiss back. Violet’s already so knee-deep in love, she can’t see straight. And that’s just how River likes it.

Blending faded decadence and the thrilling dread of gothic horror, April Genevieve Tucholke weaves a dreamy, twisting contemporary romance, as gorgeously told as it is terrifying—a debut to watch.

The Beginning of Everything 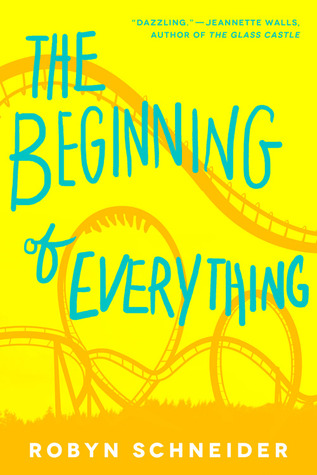 Golden boy Ezra Faulkner believes everyone has a tragedy waiting for them—a single encounter after which everything that really matters will happen. His particular tragedy waited until he was primed to lose it all: in one spectacular night, a reckless driver shatters Ezra’s knee, his athletic career, and his social life.
No longer a front-runner for Homecoming King, Ezra finds himself at the table of misfits, where he encounters new girl Cassidy Thorpe. Cassidy is unlike anyone Ezra’s ever met, achingly effortless, fiercely intelligent, and determined to bring Ezra along on her endless adventures.

But as Ezra dives into his new studies, new friendships, and new love, he learns that some people, like books, are easy to misread. And now he must consider: if one’s singular tragedy has already hit and everything after it has mattered quite a bit, what happens when more misfortune strikes?

Robyn Schneider’s The Beginning of Everything is a lyrical, witty, and heart-wrenching novel about how difficult it is to play the part that people expect, and how new beginnings can stem from abrupt and tragic endings.

by Jolene Perry and Nyrae Dawn

Rock star drummer Bishop Riley doesn’t have a drug problem. Celebrities—especially ones suffering from anxiety—just need a little help taking the edge off sometimes. After downing a few too many pills, Bishop wakes up in the hospital facing an intervention. If he wants to stay in the band, he’ll have to detox while under house arrest in Seldon, Alaska.
Hockey player Penny Jones can’t imagine a life outside of Seldon. Though she has tons of scholarship offers to all the best schools, the last thing she wants is to leave. Who’ll take care of her absentminded gramps? Not her mother, who can’t even be bothered to come home from work, let alone deal with their new tenants next door.

Penny’s not interested in dealing with Bishop’s crappy attitude, and Bishop’s too busy sneaking pills to care. Until he starts hanging out with Gramps and begins to see what he’s been missing. If Bishop wants a chance with the fiery girl next door, he’ll have to admit he has a problem and kick it. Too bad addiction is hard to kick…and Bishop’s about to run out of time.

When aspiring music journalist Ren Kingston takes a job nannying for a wealthy family on the exclusive island of Nantucket, playground for Boston’s elite, she’s hoping for a low-key summer reading books and blogging about bands. Boys are firmly off the agenda.

What she doesn’t count on is falling in with a bunch of party-loving private school kids who are hiding some dark secrets, falling (possibly) in love with the local bad boy, and falling out with a dangerous serial killer…

The gripping new stand-alone novel from the author of Hunting Lila.

In addition to the P-38, there are four gifts, one for each of my friends. I want to say good-bye to them properly. I want to give them each something to remember me by. To let them know I really cared about them and I’m sorry I couldn’t be more than I was—that I couldn’t stick around—and that what’s going to happen today isn’t their fault.
Today is Leonard Peacock’s birthday. It is also the day he hides a gun in his backpack. Because today is the day he will kill his former best friend, and then himself, with his grandfather’s P-38 pistol.

But first he must say good-bye to the four people who matter most to him: his Humphrey Bogart-obsessed next-door neighbor, Walt; his classmate Baback, a violin virtuoso; Lauren, the Christian homeschooler he has a crush on; and Herr Silverman, who teaches the high school’s class on the Holocaust. Speaking to each in turn, Leonard slowly reveals his secrets as the hours tick by and the moment of truth approaches.

In this riveting book, acclaimed author Matthew Quick unflinchingly examines the impossible choices that must be made—and the light in us all that never goes out.

Remember, this is just a taste of what’s out there this month! Pick up something new and give it a try!
Ashleyisee
xx