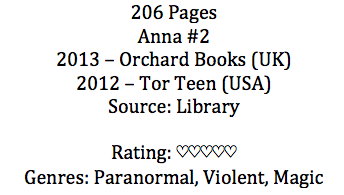 *Please note this is only a two book series.

Cas has survived his battle with his father’s killer, but now suffers from taunting dreams of Anna trapped in Hell. As a ghost hunter he’s supposed to forget about the ghosts he encounters, not fall in love with them. Anna is everywhere, in more pain through each encounter. Cas refuses to forget about her and embarks on a journey to bring her back.

Yet there’s more to his father’s knife than Cas is aware of. When a mysterious picture arrives in the post, Cas knows he’s going to do whatever it takes to open the door to hell and rescue Anna from the torture she doesn’t deserve. Even if it means killing himself.

It took some time to process how I felt about this book. I was expecting it to be a part of trilogy and was epically sad that there are only two books in this series.

However, I really liked that there are only two books. It’s so different from everything else currently being published. With characters are so full of personality that it’s impossible not to fall in love with this series.

There is love on a (somewhat) real scale, scary scenes and adventure that waits across the pond. I praise Blake for creating such a fantastic series that can blend both a realistic teenage life along with a paranormal existence that hasn’t been conquered yet. I wish there was more but am glad there isn’t at the same time.

Be warned however, there is a lot of swearing and some scary scenes that are truly terrifying. I loved every single sentence! Give it a go if you dare!