I’m doing something new for ashleyisee. Every month I’ll cover a ‘vintage’ Young Adult novel in my eyes. I challenge you to think about some of the choices I make and encourage comments for discussion. YA is a relatively new genre but I want to show that it truly has always been around, it’s just been marketed in a different way.

This month’s vintage YA is none other than the ground breaking Forever by Judy Blume. 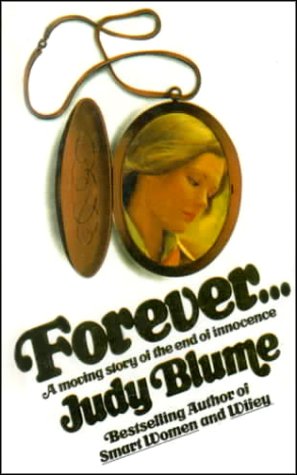 Published in 1975, Blume’s simply story of a girl meets boy, girl falls in love with boy and girl decides to have sex with boy, was one of the most controversial books of it’s time. I also like to see it as the ‘birth’ of YA. Young Adult fiction was originally categorised as a story revolving around teenage or young adult characters that experience tales of growing up.

Nowadays however, the genre is bombarded with unrealistic romance and every kind of fantasy or science fiction aspect that can be thought of. There isn’t anything wrong with these books, they still are YA, but it’s rare to find a contemporary type of young adult book such as Forever. Is it just as powerful as it was in 1975? I think so. Is it as tantalising and scandalous? Unfortunately not. However, there is one thing that makes this story timeless and that is how her main character Katherine falls in love. At times it isn’t logical, nor is she considering things that truly matter in a relationship, but guess what, she’s a teenager and that’s what they do.

Thank you Judy Blume for opening the door to teenage fiction. To paving the way for young love to find a voice.